I know, I know you all scanned every letter of that last patch for zombie related goodies and then punched your screens in collective rage at the lack of undead to slaughter. I hate no zombies just as much as the next guy.

The patch was forced by a few unsavoury types exploiting a bug that allowed them to impersonate both members of the staff and community. We took it upon ourselves to work a few of the fixes that we’ve had to postpone for zombies into the emergency patch. Mark-kicking now works again, netcode should be a little smoother, a few server browser bugs have been fixed…

Hopefully that addresses most of the issues until we can release the undead upon you (or you upon the undead, depending on how good at fighting you happen to be).

Speaking of the undead:

They seem to be packing their bags… 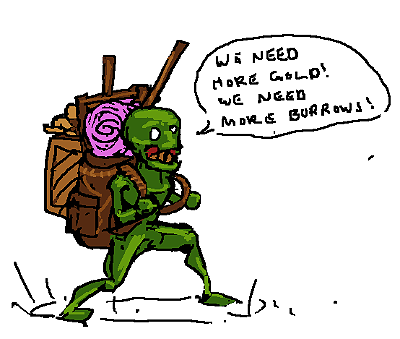 They should be in your autopatcher early February. Keep an eye out 🙂 This will be a scaled-back release so that we can show you what we’ve got so far and take a break from working night and day on these guys – it’ll still contain hundreds of undead to heartlessly murder, wang dungeons (snicker) to explore and a collaborative focus, just know that there’s more coming.

BUY NOW WITH PAYPAL
After payment you should INSTANTLY get a gift code to your e-mail. You can use this code to make your account FULL and get Zombies right the minute they arrive.

Free accounts from G+ to get the ball rolling!

Shadlington has set up a competition on the google plus page, the rules and where to sign up can be found here! Good luck!

Today we were solving some gameplay issues with zombies. This mode is hard to do because the whole game world is random. There is a lot of issues that we must predict and make it work. This is NOT gonna be a dumb game like something in Flash where you just stand on a fort and mindless zombies come at you. The zombies are gonna be part of this random world and you are the intruder. This is going to be an adventure in its own right.

King Arthur’s Gold aka KAG is officially free indie game of the year in IGM’s Readers choice (click for official link). It seems players love the game already despite being in alpha stage. So this is just the beginning. Thanks to all that voted.

Voting has still not ended at JayIsGames so do that now (CLICK) and support your favorite multiplayer game! You can vote once a day so do it again if you have already.

Today I explored the subject of Wang Tiles and Herringbone patterns.

These funny little beasts are used to create randomly generated castles, dungeons and ruins. Zombies need to inhabit something right?

Here’s a preview of the first day of work. Oh and some patches to the current public version too…

Coverage Roundup for the New Year!

KAG’s been in the news more and more recently, which is encouraging!

Firstly, the Game Of the Year poll from JiG (Dont forget to VOTE :D) at the start of the week. Did we mention you can vote every day?

Secondly, we hear the game has been buzzing around on /v/ and reddit, and they’ve brought an influx of new, seemingly highly motivated players. Good to have you guys on board, be sure to keep it clean 😉

Indie Game Mag have released both a focussed feature of KAG and also put us in their list of 10 most promising indie games in alpha. We’re stoked that they’re so pleased with the game! If only they could have found some more up-to-date screenshots for the top of the prime feature post, haha!

Lastly, MM and I had an interview with the awesome Capsule of Capsule Computers. Get some insight into our thoughts in a more formal setting there.

It’s fun reading press about your own work, hopefully we see more over the coming months 🙂

* BUG FIX ONLY RELEASE *
Doesn’t have anything new (like darkness), because that is still not finished.

A note from Geti about the new build and the current development angle, slightly out of context (full context here)

Secondly, (I know this is going to frustrate a lot of people) the game is currently in alpha. That means everything is subject to change. Anything can and probably 70% of stuff will go through more change. Once the game goes beta, we’ll be doing focussed refinement cycles and finalising everything. I know it’s frustrating when there are bugs, but it’s also frustrating when development moves at a snails pace.

We’ve just done a bugfix release (interrupting zombie development work) to help appease the masses and to keep the game playable, but honestly I sat down and played public for about 3 hours today (on alias and off) and only a few bugs actually interfered with the game (squeezing, counter issues and some lag teleporting). The chat up the top bugs me a little, but that’s MM’s choice.

Thing is, when we sit down and tweak things and remove bugs for months and months, the game stops being fun to work on and you guys stop seeing any real progress.

As for reporting bugs, bugs.kag2d.com plus reminding me on IRC is the best way to go about it. I’ll forward them on if they aren’t already on the list of things to be fixed, as we have our own internal listing system. Most of the bugs that get reported are things we already know about and have scheduled time to fix, but it’s better to have duplicates than no reports either way.

Now, me and the community…

Of course I’ll stay around and chat with you guys! I’m not going to vanish, though as traffic increases I’m not going to be able to keep up with the amount of material posted (I’m having trouble as is). If it seems like I care about the community, it’s because I do – don’t forget that.

From what I understand, both teams decided to have a round of builder-only fun, and as far as I can see, most players stuck to the rule and had a great game.

Could be something to try channeling while you wait for zombies, server owners 😉

Hey, we know some people have gone to the trouble of setting up specialised community sites for KAG (the excellent kag2d.fr managed by kiro springs to mind) – We’d like to give recognition to those who’ve managed to help KAG make a splash and are requesting links to all active KAG sub-community sites.