Hey guys, we’re going to be ramping up the news and previews of Trench Run as we come up to the next build launch; there’s still a while to go before we can give a full public release of everything but we’ll keep you up to date with anything that’s happened, good or bad. We’ll be trying to do the same for KAG, but progress there is likely to be more sporadic.

The next release of Trench Run will be focussed on online play for supporters – remember you can pre-order the game here to ensure you can play as soon as it’s out!

This week MM was sick, so I worked on animations for a band to play the in-game music in the lobby, requiring quite a few frames of animation and somewhat careful animation speed synchronisation (they don’t play exactly the tune but keeping in time with it is always nice, haha). I’m quite happy with the result, which you can see in gif form below.

The band are playing on a little stage amidst the bushes on the lobby map.

Paul (the composer for TR, @pz_music on twitter) has almost completed the soundtrack, which we’re very excited about. We’ve already got gypsy guitar tracks per-biome, and the main theme has been beefed up with drums and double bass, which will really takes the tracks that need it up on another level! It’s been great having a musician in-house to really nail the feel we want, and Paul continues to amaze! We’ll see if we can give some track previews next time around!

Once MM is back he’ll be working on a few engine-side bugs, and then we’ll be working towards finishing our skirmish lobby milestone in the next week or so – from there we’ll be polishing the major team-based mode, Campaign, which is the last big thing to do before the next release. Campaign is a tug-of-war mode with fixed class balance and a cast of unique characters – it’ll take some time to finish, but once we have a working proof of concept, we’ll look to open it up to all supporters!

We’re looking forward to sharing the last few months’ improvements with you as soon as possible! Watch the blog or the forums, or follow us on twitter (@thdtweet) or like us on facebook (TrenchRun and THD) to stay up to date with the game! 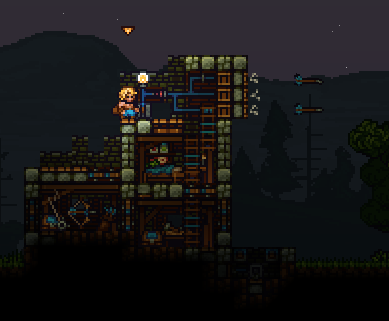 Prepare to get creative!

Before we get started, there are a few minor issues that have bled through from TR development into KAG, the “big” one is that fonts are smaller in various places – including the “Respawn In” dialogue and the loading screens. The old fonts will be back as soon as we find out exactly where they should be changed back properly (rather than a band-aid fix). If you notice any other strangeness please let us know ASAP so we can fix it!

Hey guys, some might have noticed a new build come out of OSX/Linux but not make it to windows – the windows build machine is unable to push to release at the moment, so we’re totally reverting the build now, and will work on getting the next version re-released ASAP. Sorry for any confusion or hassle in the meantime, we’ll be working to get the issues sorted out come Monday.

Thanks for bearing with us!