So, this little thing:

So, we’re losing on this poll, and they spelled the game’s name incorrectly! Not a great start, but considering there’s less than 200 votes on the board we can turn this train wreck around with your support!

Voting us up takes ~5 seconds, get in there! Vote KAG! Tell them the spelled the name wrong in the comments for bonus points! Support your country Game! … Oh, and us, too 😉

Edit: Huzzah! We’re on top and they fixed the name and it’s thanks to you guys!

Thanks for your support guys!

Edit2: Yikes, AoS is catching up! If you haven’t voted yet, hop to it! It’d be good fun to win this thing.

Sneak peek into what I’m working on this week all explained in a nice picture. Other than that I’ve started exporting the game rules (like what happens on score, how much points for doing stuff etc.) into a script file.

This from one of our Guards, Neat:

Red, and blue, the biggest recorded single battle ever yet. We now have a 128 player server. It may have crashed at 60 players the other night but I think it’s worth a try to get as many people, hopefully the maximum number in at once.

If posted to tumblr and facebook and this forum, I reckon we can get 128 people at any one time and keep it going for a while (presuming it doesn’t crash, they’re going to work on the issues)

Kag is not tennis, Kag is WAR.

Help us iron out the networking bugs by tweeting/spamming facebook/mailing your grandma about this and playing on that huge server, we want to see some epic recordings and hear some amazing tales, and most importantly bug reports when it dies detailing when, how and why 😛

MeteorVPS 128 Slot is the place to be!

Oh this was a bad one. It seems like the big guys, like us and Apple are having problems these days :). But I was faster to fix it!

I noticed the amount of players online suddenly dropped so something was wrong. Servers and clients have to patch. Please restart to auto-update. 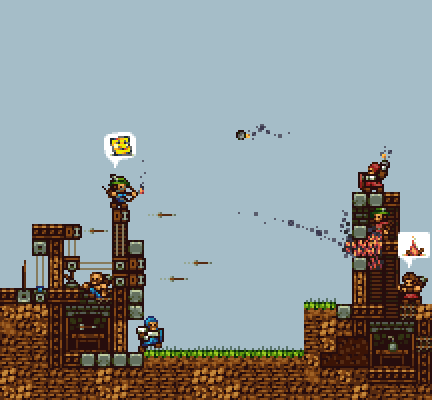 This picture basically outlines 5 things we want to get done alongside the October event, some after, some before:

We’ve got more plans, but they’re not concrete so I’m not posting them. Feel free to ask questions in the comments – I’ll be watching this post over the weekend.

Another quick patch. We’re ironing everything out before the next major builds that will bring some awesome new stuff. In the meantime the major bugs are being eradicated, I’m especially proud of fixing the collapsing issues. Should look much better now!

Added a “Basics & Building” tutorial. This is something everyone starting with KAG should play first. Something like this might be mandatory to pass through in the future so that new players don’t spoil the fun for people already playing. Fixed numerous most critical bugs. Please report if any of the mentioned bugs still remain.

Beware griefers! Mods can now freeze you by pointing at you with the mouse cursor and pressing [F3]. If you didn’t do anything illegal you can explain yourself during this time.

I might or might not do this monthly or quarterly or whatever to see how everything changes over time. Here’s the rundown on new user registrations and total user logins per hour over one day recently: 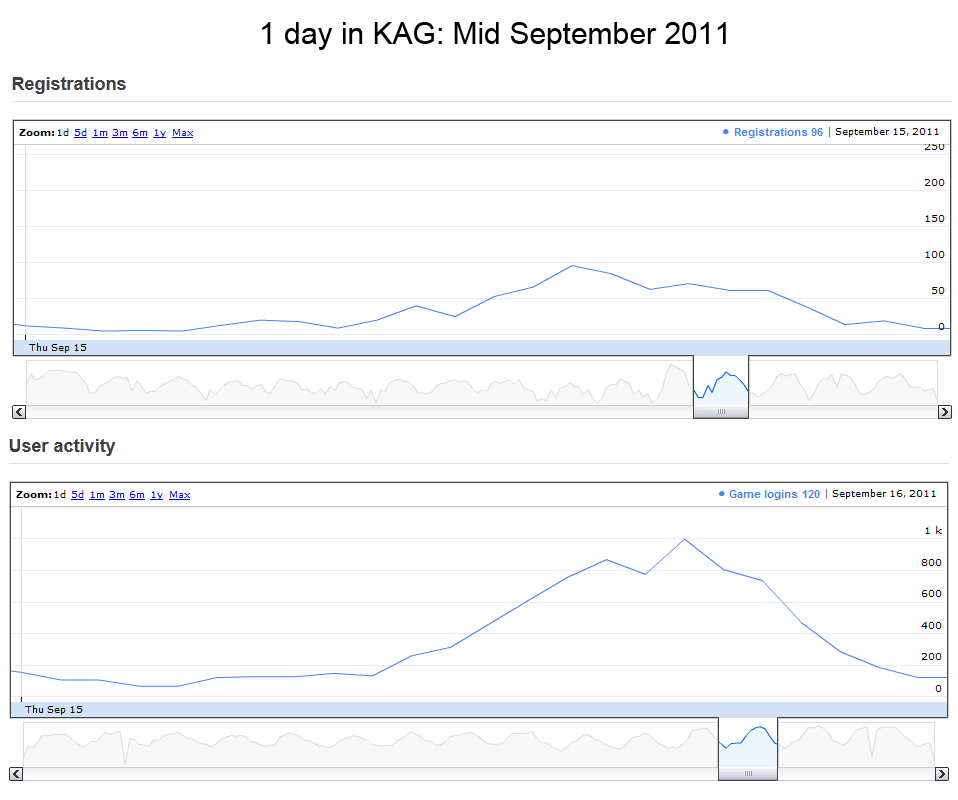 That is what happened in KAG last Thursday. I picked Thursday because it marked the start of how the game’s population seems to be progressing – the day before had a large jump in registrations (see the log graph preview on the first graph above!) – and every day since then has been roughly the same in terms of activity both in registrations and activity (if you look closely you’ll see a higher volume over the weekend with some interesting spikes, but it looks to be continuing roughly the same)

User logins seem to peak around 2-4PM in a “KAG Day” (wherever that is) which is slightly after the peak in registrations. A “Dead” period (server population likely lower than 50) occurs from 11PM to 11AM.

By the sound of things the peak is probably when France does most of its gaming, which would overlap considerably with the rest of Europe. It seems to me that we don’t yet have as much of a presence as we could in the US, as logins are low apart from the EU spike. So, if you’re in the US, feel free to tell everyone you know good things about this game 😉 We could do with evening this graph out a little, I think.

…That’s more or less all I wanted to say about the stats we have at hand (we also have cumulative registrations and are looking into logging more so we can learn more about when/how you guys play), I hope someone gains some insight from this – see you all for more chatter about blue lines in a month or so!

Keep your eyes on the blog for some gameplay (and premium) related content coming soon!

Besides tweaking some things, improving the auto-updater and fixing bugs we have now a completely NEW SERVERS BROWSER! Attention knights! You can’t destroy now castle backgrounds with a normal hit and you can’t destroy your teams open doors. This is to prevent random damage when fighting inside your castle. You’ll need a full slash to destroy the castle back wall.