Build 926 – Story behind the Build

It seems every game of KAG I play recently I have the same 3 nags :^)

Here’s the meaning behind these, and how I’ve addressed them this build:

Hopefully this addresses those three main concerns directly and sufficiently; we’ll be looking into the next emerging concerns soon of course! (I expect performance to be the major one, sadly)

Other notable changes this build:

MM and Shadlington and FliesLikeABrick have all been working through the weekend and all this week on the steam stuff, it’s looking very close to ready, so that’s exciting. I’ll get MM to post more news as he has it since he’ll be better informed on exactly what’s going on than me.

I’m sure Geti will add more info concerning this build when he’s online. Right now I’m in a hurry so excuse my brevity. Come back later for more news on this build :).

The way voting works now is “lazy kicking”. This might change cause it’s an experiment, post your comments. Voting is now in scripts so you can modify it as you wish and add main menu items (cool!).

Your character name can be changed with the /cl_name command in console. This is part of preparing for the Steam release where players from Steam will use their Steam persona names in KAG. Your username will be visible in paranthesis in the scoreboard

The known issues about mod downloads have been fixed. If not let me know!

if KAG is taking extremely long to startup goto /KAG/Base and delete the /old folder.

I scheduled Steam release for Monday November 4th. This might still change because we need to finish the trailer and make sure everything is working, first with testers and then with public.

That’s right – if you bought KAG you will get pre-release access to a Steam code and will be able to play KAG from Steam before the official release. This should ease things up for everybody and deadline slips won’t be so bad :). Stay tuned for when this will happen (hoepfully this weekend).

There was meant to be Build 926 Today…

Instead, steam integration bugs that were merged into mainline have prevented release – while it isn’t essential to run KAG through steam, there have been a few integration points that have required changes to the “normal” behind the scenes stuff.

The funniest/most annoying of these currently is everyone’s name getting a 2 applied to it (locally and on net) as if they are the second to join. We had a good testing session with JTG2, sinnertie2, Monsteri2, Lieber2, Geti2, Mazey2 and bst Kouji (because clantags seemed to avoid the bug).

In a way it’s a good thing, because it means all the steam integration bugs are exposed to testers and can be fixed asap, but it’s bad because its another day without votekick, without modding fixes, without extra heads, and means that steam deadlines are again, quite dicey.

However, we’ve found that we’re able to give more or less whoever we want access to the game via steam, so we will probably do that this week for players who have already bought the game, to properly test the steam integration stuff before we launch it. We’ll tell you when and how you should request a key.

MM has set a tentative steam deadline for Monday, and these bugs shouldn’t prevent us from reaching that, though they sure to mean it’ll probably be a close shave.

Next build will have fixes or partial fixes for the 3 major repeated concerns I’ve been hearing from everyone:

As such, I’m as anxious for a patch as the next guy, very disappointed we couldn’t get it out tonight.

More as it comes; figured we should keep you updated while we try to get this thing out; bear with us.

Of course, the most important news first ;^) 2 new heads have been added, templar heads that (while knight focussed) look cool on any class! Now you can enjoy your own crusade – minimising religious persecution, of course. 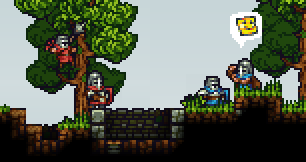 There have also been a nice plethora of misc fixes and tweaks:

Steam update: MM tells me that we’re waiting on valve for the release, there are a few minor things to complete but the integration is “mostly done” and the store page is more than functional, with flashy promo images like the following:

We’re working as hard as possible on getting the game released there; the waits from valve are a setback but nothing we’re unable to overcome. The game will be released ASAP – when exactly that falls is anyone’s guess, but for all intents and purposes we’re “ready” and just waiting for the checklist to be looked over and the big red button to be pushed.

We’re not 100% on the date because as mentioned above, we’re waiting on valve for this, so it’ll be done when they’re ready. ASAP is as honest an answer as we can give – that said, hopeful estimates are early next week if they get their act together.

Quite a few things, all of them somewhat minor but definitely worth mentioning:

News on the steam release – as valve don’t work over the weekend, MM is currently slating the steam release for “Approximately Monday”. This is still subject to change, but we’re as anxious to get it on there as you are – trust me :^) We’ll keep you posted as things solidify, there have been some more frustrating issues on non-windows platforms. As usual, everything is just that little bit different.

I heard two inspirational stories about gifs and indie games yesterday and decided to dig out some old unused gifs that were meant on our website. These aren’t as good as the ones on the web page but still cool I think.

Oh and we’re coming to Steam some time after the weekend. If you buy now you’ll get a Steam code once it’s out! (and we get the entire cut instead of % for Valve:p)

Edit: Considering that buying direct from us gives you a steam key, if its possible for you to buy direct then we’d appreciate it – if it’s not then don’t fret too much about it and just enjoy the game.

This build is another minor one as we’re mostly working on steam related stuff at the moment. That said, it’s always good to get a balance/tweak patch out before the weekend. Failing that, it’s good to do it at 2am on Saturday ;^)

Realised a lot of these haven’t made it to the blog/news and that the last one would be good to go out with a bang :^)

Vote in the thread, basically 2 votes for the heads you want, and the ones that get voted in will get added to the game.

This is the last one for now and there’s only a few days left so get voting for your favourite head!

Also: new build will be out tomorrow, the build server is a bit sick at the moment but should be fixed by then. Changes include bug fixes, two new maps, and more coin where coin is due – from damaging enemy vehicles and from building things like workshops and doors.

So, you know that slideshow thing that happens when the catapult fires sometimes? Hopefully that’s fixed. If it’s not, let us know in the thread and tell us if the parameters have changed at all (used to lag as the rocks hit the ground in busy games).

As well, cata damage versus tiles has changed a little, and the vehicles code has been completely reworked by MM today to require many fewer hash table/properties lookups. This basically means it runs faster, as confirmed by profiling – we’ll see how much of a difference it makes in public games though.

Particles have been optimised a little more – there’s still one possible optimisation there that will be turned to if they still pose a problem, but the focus at the moment is problem scripts :^)

Very glad to be done with B911 and its map problems.

Server owners, for the third time in 24 hours, get your patching hats on!

There was a bug in the map cycle pushed, this has been fixed but needs server owners to patch their servers! Build should be out in 30 minutes or so – thanks to JTG and the players of Donk CTF for “identifying” the issue :^)