Finally getting out this “mostly small fixes with some bigger stuff” build after testing has come back ok! Sorry for the delays!

(Weekly log covering TR progress likely coming on Monday when we can fully asses the situation, today was all about KAG) 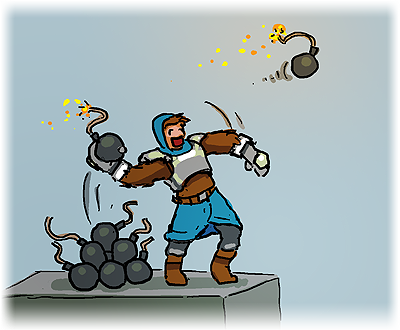 Spamming bombs with abandon is less likely to bring you success this build.
Sorry Henry!

This build’s headline changes are:

Changes for hosts Generally changes that wont affect most of you, but important for community server hosts to be aware of:

This has been a week of ups and downs; some good progress was made but both Max and Michal were under the weather for the first half of the week. We ended up prioritising TR work over getting a KAG build out, and while we’re sorry for the delay, we don’t want to rush it and cause more work for us and headaches for you down the line. We’ll bump it up to a higher priority for next week.

Most of our time this week was spent getting the team-based campaign mode into a partially working state. Campaign features larger maps, 5v5 action, and an enforced full range of classes (every class is present on both teams). We’re taking some leeway with the maps to provide a clear “main route” that everyone can take without any help, and routes that require destroying debris, planks, or crates to get through, to allow more than one approach from both teams to keep gameplay fresh even with just one set of maps. Maps are mostly symetrical, with some asymetrical elements in the centre. 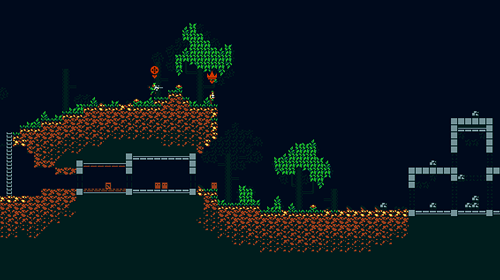 A sniper and commando rush to take control of the middle on a draft of the forest campaign map. Where their allies are, noone can say.

This week has also seen work on the new Medic class. The Medic will only be available in team modes, and has no primary attack. To make up for this, the Medic has three support actions; the large riot shield can be used to protect allies and reflect enemy bullets, ammo box supplies can be dropped often, and the Medic can (as its name suggests) heal any fallen allies as well. 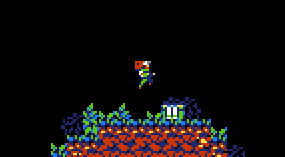 A team-mode-exclusive new class, the Medic, leaps into the fray!

We think that this class will have a very important role in helping the team move forward against camping teams (as they can provide moving, rather than stationary cover). However, we’re aware that the “non combat” role will turn some players off, and that this will ruffle feathers with the mandated class balance of campaign – CPU players are available, however for cases where a group of players don’t want to include a certain class, or for low-population times of day.

Some work was also done on the recreational elements of the lobby (in particular, the bar!), but details will have to wait for a future post. Stay tuned to this blog, the forums (here), twitter (@thdtweet and @1bardesign), or facebook (here) for the latest development news!

Hey everyone, sorry for the late log, here’s what’s happened this week at THD!

For those who missed it last week, you can listen to a preview of the main theme on youtube:

We’re committed to this gypsy style but we’re keen to hear what people think of it as well; what sort of feelings and images it conjures up for our players.

Lobby progress this week has been good; the old lobbies have been converted to the new truck system and it all feels quite a bit more polished and fun. There are still some issues getting all the servers to talk to each other promptly for things like synchronising coin changes, but the system is mostly working, with trucks coming and taking people off to games, and testers able to gain and lose coins based on the outcome of the games. So far, the coins are just used for entry costs for games (harder lobbies cost more per game), but we have plans to allow spending them to change outfits, buy booze, bet on card games and perhaps high-stakes duelling!

For now, you can spend your coins on the driver’s fuel money,
and ammunition costs! ;^)

Campaign mode (the major team-based TR mode) is not yet properly functional, but will be our main priority for next week now that most of the lobby stuff is working. We’re really excited to start experimenting with the class interactions that become possible in a 5v5.

The API Issues that have been plaguing hosts have been investigated a little more and we may have found a workaround, thanks to Asumagic from the community for giving us a tip-off on a modded partial solution. Thankfully, we avoided touching the API Client code, which would be a very big job to rewrite, and is not friendly to modification. For players, this will mean fewer unstable servers, should the changes work as intended. These changes will affect KAG and TR.

In KAG-specific news, we’ve had some issues with new menu code and still need to test various balance changes that have been applied. Our plan is to disable the new menus until they can be properly tested accross all platforms, and take the balance changes and reversions through their paces. We’ll try for a build next week, but it’s quite a busy time, so at worst we’ll keep you informed and aim for the following week.

This week in Trench Run news – some clarification on our current direction with the lobby!

Over the week we’ve had a big discussion about what we really want to get out of the lobbies – and decided that it should be a social as well as functional place for players of a similar level to gather. To that end, we’ve reduced the number and variation in lobbies immensely from what was planned. This has meant scrapping some previous work, but we feel like the new direction is much more focussed and will make more sense for players in the long run.

Before we get into the new one, the previous plan was to have a lobby per-gamemode, as well as some minigame lobbies, and to swap between them with a menu. While this is an achievable and practical goal, it led to quite a large number of lobbies per region, with concerns about being able to reliably fill the lobbies each day, even at peak time. As we all know, a surefire way to ensure a game dies early is to split up the players.

The current aim is to have Novice, Regular, and Master lobbies in each region, and to do gamemode selection (currently just skirmish/campaign) within that lobby. This makes it so you can see everyone who’s playing at your skill level in your region, and where they are playing their games. To accomplish this, we’ve had to create some new assets and still need to create new code to run and maintain the multi-gamemode lobbies, but we think it will be well worth it in the end.

The physical structure of the lobby is still in flux but the plan is to have a recreational area in the middle, initially featuring a bar, band and basketball hoop, and trucks at the sides that players can get into to join games. This gives quick, physical feedback on which gamemodes have faster queues, and allows easy switching between waiting for each mode – you just go and get in the other truck. 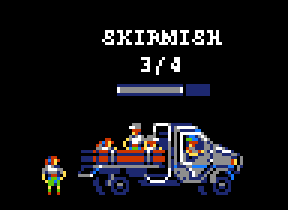 An early mock-up of the truck with players inside waiting for skirmish.

Whatever ends up happening, the Novice lobby should feature an expanded help HUD to help new players understand the lobby system quickly. This would be absent in the Regular and Master lobbies as players there will already have an understanding of how the lobby works, meaning new players can learn quickly but old players dont get nagged by tooltips!

Let us know what you think of this lobby direction on the forums! It’s still in flux and your ideas could help shape the game for the better!

In other news, Paul has finished the bulk of the soundtrack, including the main theme and themes for each biome! We’re working on getting the new tracks in game asap and have been looping them in the background while we work. The soundtrack is the kind of music that gets into your head easily, you’ll be humming the tracks on the way to work or school we promise! We’re so happy with how easy the process has been and how nice Paul is to work with. Definitely a highlight of the week!

KAG news will be coming shortly as we’ll try to get a build out next week if all goes well; Norill’s work on menus may be released if everything tests well, but otherwise the impending changes are mainly bugfixes, balance changes and reversions.

Don’t forget you can follow us on twitter (@thdtweet and @1bardesign) or like us on facebook (here and here) to get these updates direct via your social media channel of choice and show your support!