B834 – Spikes, Better Necromancer and Lots of Fixes

New update – Work in progress and more to come, but should address a few of the concerns people have been having. Important changes in bold as usual. Check the new spikes – they let your run past but also restab. They do less damage as requested to prevent paving the world in hurtiness and cost the same.

Sprite operations have been sped up a fair bit as well – if factories were lagging for you when onscreen please post here if that is fixed – if not we may need to take more drastic measures.

More updates will be out probably by the end of the week, but this should help tide you over until then!

A couple words from MM, watch it:

To be more specific 🙂

this is what you’ll find in the NEW King Arthur’s Gold beta: 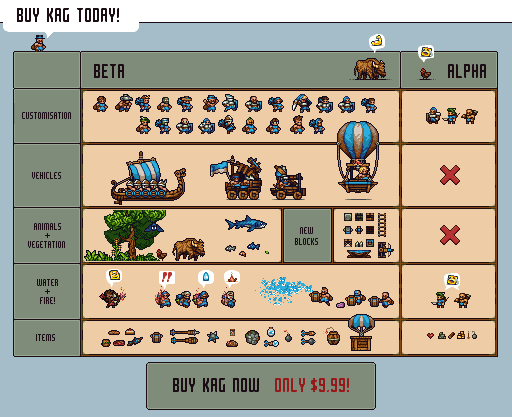 Flowing Water (as in Minecraft classic:)

Works on Windows, Linux and OSX

Still more to come! We’re not done yet!

This game will get you hooked.

It’s hundreds of hours of fun for the price of lunch!

You’ll experience a never before seen blend of real-time medieval building and combat in a fully destructible multiplayer environment.

No other game comes even close to this.

This game will give you the most intense action & fighting moments you’ve ever experienced. It beats the best scripted sequences in other games, simply because it’s all real people just like you: playing, having fun and being creative.

It’s still not finished yet, so we will be pumping updates.

After you buy the game we will publish the game mode known from classic – Capture the Flag and later on Zombies (you can still try Zombie Fortress in classic and play on gold servers after purchase, we’re not ceasing classic). We appreciate that a lot of classic players are finding the transition too jarring so we’re hoping we can help you migrate comfortably. We’ll go into this in more detail as soon as possible explaining what’s planned, what isn’t and why.

You buy this game once. It’s not subscription. You pay 9.99$ and have it for life, and have it on Steam or Desura when it’s there. We ask for nothing more beyond common courtesy. In fact we will give YOU something more just because we want this release to be a blast. That’s why for the next 2 weeks the price is still the low “pre-order” price + you get a BONUS.

a chronicle of KAG’s development

You’ll see which ideas made it into the game and which ones didn’t make it. Putting this together was a huge walk down memory lane for us 🙂

Because buy stuff on the internet is tricky sometimes

Just select your preferred method of payment: PayPal, Amazon or Google – you can also simply pay with your phone (Mobile SMS payment via PayPal) if you don’t have a credit card or e-money.

Next you will get an e-mail with a code in it, which looks something like:

Simply redeem this code once in your account panel on kag2d.com,

download the beta installer, run it and you are ready to rock.

(you can buy gifts too, because you can give the code to somebody! hooray!)

This has been more than 14 months in the making now, and is only just becoming ready to let you all in. Thanks to the community at large for all your support so far, and to the active testers especially, for bearing with daily bugs, server hassles, late nights and arguments. It’s been a wild ride so far, but it’s not over yet! Join us in the final stages of this game’s birth as the greatest medieval multiplayer experience in the world!

Last 12 hours of Indie Game Stand Sale, and some teasing

This sale has been quite exciting for us, a large number of new prospective players, a good amount of money to help fund development (funds have been getting quite low recently) and a chance to reflect on the past with the 189 page art and ideas book collation.

We’ve been working on a major overhaul of the site as well as many a bug fix. As always we’re a little behind time but with so much going on and only 2 of us really around, it’s been a wild week 🙂

Stay tuned for some pretty big news coming either this weekend or as early as physically possible next week!

I figured rather than spamming the blog and twitter with several posts I’d do a roundup of community contest, giveaway and tournament goodness.

unlimited slots, 3 KAG codes to win, EBook to win, more info in the thread (click above!)

That’s all for ones currently accepting entry, so 7 codes available for free if you play your cards right. That’s seven more happy gold names just in time for the impending beta release!

Some of these are ongoing – check out the forums here!

If you’re hosting a tournament or giveaway and want coverage feel free to get it touch, I’ll see what I can do. Please ensure your rules make sense and you actually have something to offer before doing so though, I get enough correspondence as is 🙂

For the next four days you can pay whatever you want for KAG!

IndieGameStand is a different approach to the “Pay What You Want” sale pattern, where instead of a bundle of games, each game featured gets the spotlight to themselves for 4 days.

KAG is on there at the moment, so if you are strapped for cash or want to get some friends into the game cheaply (or maybe just support development some more and have a look at the art book, you good hearted awesome people … :^) ) check it out – over a hundred new smiling faces have gone gold since it started a few hours ago! 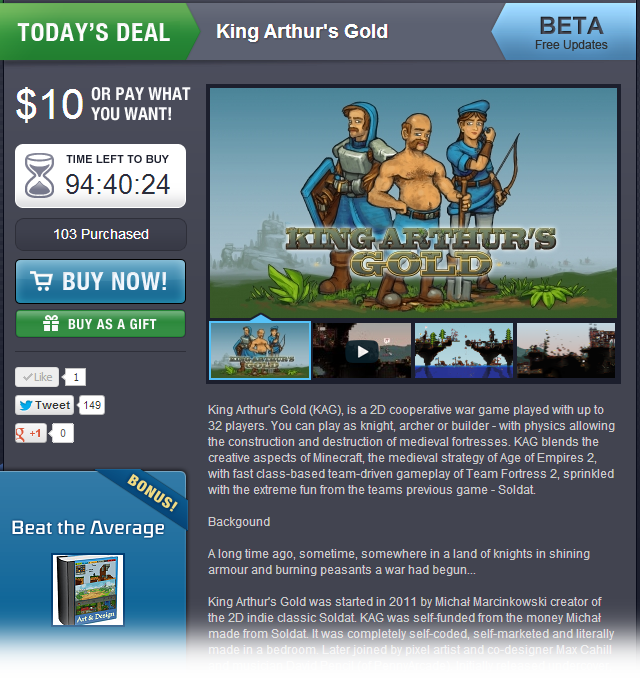 Click here to have a look, beat the average for access to a one-off 189 page art book cataloging the history of the game! The Art Book collates all the art done for development, from the wild pipe dreams to zombies sketches to new design pictures.

Included in all sales is access to the current state of the beta (check the forums) – we’ll be talking more about this very soon and will do a more official and public release asap. We’re very excited about how far it’s come, and will continue working our butts off on making it the best game you’ve ever played!

Tell your friends, and enjoy!

Short update on the Beta + screenshots KAG Beta requires you to buy the game to play. So if you haven’t done that already do it now here before the noob rush when the game becomes official and arrives on Steam 🙂

It’s just 10 bucks and an infinite amount of fun + you can unlock it later on Steam.