The “New Art” implementation is under way! Currently we’re just focussing on getting the terrain art in, because it requires the smallest number of assets. This will let us assess any changes that need to be made as early as possible. New map loading code and a simpler map format are being developed to accomodate the new tiles. 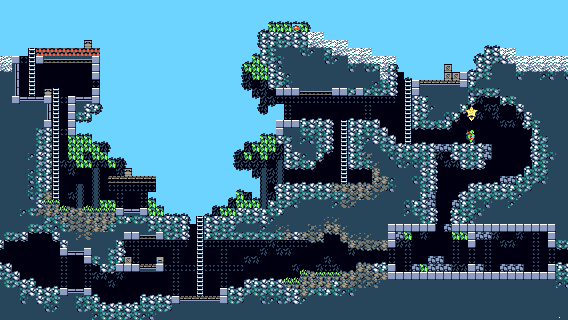 The graphics in game are currently at this point – lots of issues but coming along.

Because there’s a lot to do to get everything converted, Michal is working on a Separate Expo Version for Pixel Heaven. The most exciting expo feature likely to be carried over to the normal version is per-player stat tracking. We track many stats, such as accuracy, weapon use, time spent in the air, and time spent dead. There is also a framework for tracking more information should the need arise. These stats may end up being globally tracked for ranked matches – depending on how hard the infrastructure is to set up.

Skinney has been working on the look and implementation of the map editor, “Cartographer”. He’s toying with a simple “paint program” aesthetic. Skinney plans powerful quick-search functionality, to prevent sifting through lists of tiles by hand. 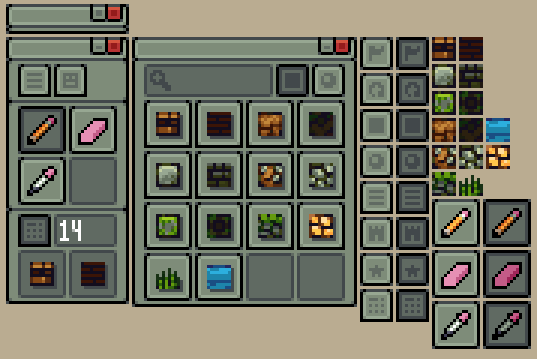 The map editor will look and function like a straightforward painting program.

Verra has been working on a few features that are likely more relevant to server owners than players. A few game-side memory leaks are being investigated. Chat and console logs are now flushed from memory beyond a certain length. There is also a decrease in the verbosity of logging of some things, such as entity creation. All in all he reduced the memory footprint of the server, which is a great result!

That’s it for this week,

Last week was a quiet one for progress we can share, but I’ll go over the details of what is shareable. Apologies for the post coming after the weekend again!

We’ve committed to the new art style. I’ll spend the next few weeks to a month getting the new graphics in-game, and refining any issues with them. It’s important to understand that this is not just a simple palette swap. The new art both expands the colours available and involves a lot of tile and sprite rework. We’re focusing on improving readability; as an example we’re having team colours on the characters – something that was impossible with the 8 colour art.

On the gameplay side of things we’re making a few small changes to improve the reliability of game times. Endless stalemates from balanced teams are an issue in KAG; that’s something we’d like to avoid in TR. MM will spend this week swapping the Run mode over to a “Best-of” format. He’ll use the testing group to ensure this works out as intended. This change should shorten wait times and ease player fatigue.

Skinney has got some work done on the editor, “Cartographer”. He’s mocking up a few possible interfaces at the moment. It is not only a tool for creating maps, but also a moderator tool to help admins combat griefers and hackers. Cartographer should also help with building and testing clever mechanism layouts.

Verra has got some optimisation work under way, addressing how KAG interfaces with Angelscript. He has also fixed the “endless downloading” bug that prevented joining some modded servers. This turned out to be two separate bugs on different operating systems. On Linux, the bug was a file permissions issue. On Windows, it was misuse of a system function. Both issues caused the same symptom in different ways, and Verra managed to fix both. This should make the experience joining modded servers more enjoyable, to say the least!

Hey guys, sorry for the delay on the update. Last week was a trying time, but we’ve gotten back on track. So, lets get to it.

TR
development has been going along strong. The Run mode testing has shown
that playing in a team on bigger maps gives the game a totally fresh
feel. Run allows for much more depth than the free-for-all skirmish
mode, but requires a bigger commitment.

Some issues that we’re addressing include:

Of the issues from last week:

However, the big news is not related to gameplay…

When
we first started making Trench Run, it was meant to be a fast, quite
small, 2-6 month project. More experimental graphics that we could
produce quickly were settled on at the start of the project. However, as
the project exits its first year we are at a point where the game
should probably at least pay for itself. As such, we’ve decided to
rework the graphics to be more appealing to a wider audience. They’ll
still be lo-fi, but less abstract, and with room for team colours to
help readability. Our graphical aim is “a game made from 2015 styled
like the 90s, not a game from the 90s released in 2015”. 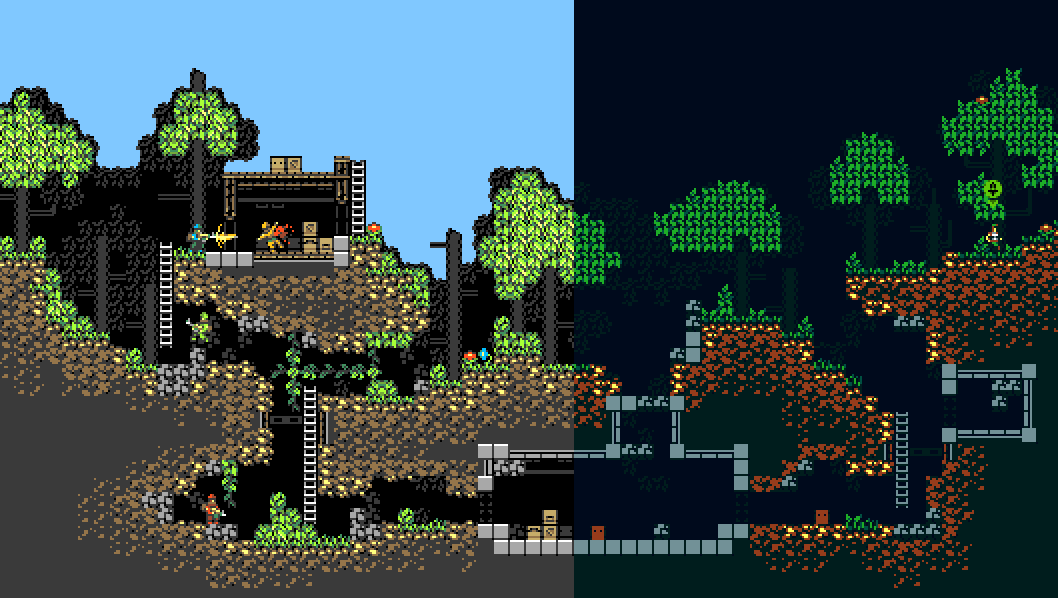 Current pass over The Forest biome (new on the left, old on the right, full size x2 pixels here). We hope the extra time shows, because getting all this in game is going to take some doing!

This
is quite a frustrating decision for us to make. It pushes game code
work from me on to Michal, and it will take a few weeks of full time
graphics work at least for me to get a full game’s worth of art
reworked. However, its a decision needed the good of the game’s
financial success. The game being more accessible should mean you guys
have a bigger crowd of people to play with instead of another small
clique of die-hard fans.

We’ll be doing more experimentation
and polishing of the current mockup graphics this week, but I think
we’re set on this direction now. We’ll keep you updated as the game and
its art style develops, and we trust you’ll bide your time alongside us
as we work towards a better Trench Run!

Verra has got to work on investigating various modding “annoyances” and smoothing them out:

Progress is looking good and we’re happy to have him aboard!

Until next time,
Max

Hey everyone, progress has been good this week so let’s get into it right away!

Trench Run had its first proper successful testing of the campaign mode. We had to shrink down the map size to improve match turnaround when there’s evenly matched teams, but that just means we’ll be able to make more maps, more quickly! 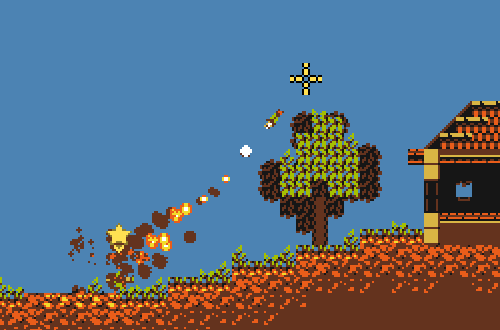 A few unexpected quirks have been found, as well as many a bug. Many have been fixed but there is still quite a lot of work to do. A sort of meta-game has developed with some of the players as well with the engineer staying back with some supplies dropped by the medic and “air striking” the map continuously, with the other team having to stick to cover to avoid the rockets. We’ll definitely be looking into the explosion radius for the engineer rocket (having whole teams blown to bits ten seconds into a game might be a bit much), but it’s very fun to see this kind of strategic play so early in this mode’s testing!

We’re currently considering renaming the mode from “Campaign” to “Run” – the motivation is that campaign doesn’t say much about the objective of the mode, whereas run does, and is short, catchy, and 50% of a title-drop to boot. What do you think?

Verrazano, a programmer from the community will be joining the team of interns here at THD! He’s excited to work on common frustrations for modders so if you’ve noticed something inconsistent or annoying while modding the game, he’s the guy to talk to about looking into it! We’re glad to have him aboard, so congratulate Verra if you see him ingame!

Skinney continues work on the in-game map editor, which he’s dubbed “Cartographer”. This will be an invaluable tool for creative folk and admins alike, and is an important usability improvement over directly editing image files, especially when placing and arranging mechanisms!

Norill continues work on the port of the game menus to scripts which will allow them to be much more easily refined and re-arranged.

Build 1591 seems to have gone quite smoothly after a few initial hitches were dealt with. The new maps in particular have led to much shorter games of CTF when decisive plays are made, which helps prevent teams leaving through attrition and keeps the game flowing. Check out the forums for some ongoing discussion of trap block behaviour and the dreaded bomb nerf.