News on next release

I’m already working on the next release. This time it will be much faster (a matter of days). The planned releases are segmented into 3 parts: hot fixes, player customization and zombies. In that order.

The last one will probably take longest but will be also the most cool thing. Probably the most fun thing in the entire game!

There will be also some surprises…
But first things first:
fixes and improvements to the current version.

The unit counter is a very fun addition. Many players especially like what happens when unit counters get depleted. The thrill of permanent death is amazing!
I am thinking of changing the team unit counter to player life counter. So each player would have their own life counter (like 20 lives each round) and would not have to be penalized by some prick that gets killed over and over again.

But this also means that players might sit in the lobby forever if they deplete their lives. So a “sudden death” would have to be introduced. I’m thinking that, if half of the team is dead and can’t respawn, the whole team’s lives deplete and its sudden death. Just to make matches quicker and not be boring for people that killed themselves quickly.

This is the largest update we’ve ever done. So much new cool things to do! Please read this whole post so you’re not confused by the changes.

First watch this video for a really brief run through the new features:

Of course that is not all. One of the main gamemode improvements is the addition of UNIT COUNTERS. On the top of the screen you’ll see a team unit counter. Everytime you die, this counter decreases. Once the counter is depleted nobody on your team can spawn any longer. The team that kills all enemies on the counter and all remaining ones wins.

All the main combat mechanics have been changed and improved. Until you jump to conclusions please spend some time playing the game and actually seeing why this happened. The majority of time spent on this build was actually play testing. For every nerf there is actually a buff for each class. The addition of arrow workshops disrupted the games balance leading to many changes. For example:

The catapult arc and firepower has significantly changed. You’ll need to get a lot closer to the walls to destroy them. However you can pick up the catapult and bring it closer!

As you’ve probably seen on the test videos, you can now put anything into the catapult and launch it (not corpses but that is planned as a feature).

As a reminder. The controls are very much changed. All things to a degree, are controlled with pie menus. Pretty much like the blockmenu. So press the menu button and hold it. Hover over the pie slice (button) and release.

We have now coins. You get coins for doing useful things for your team.

You spend the coins to buy bombs, arrows and heal in the quarters. Pickup items with [C] or by holding [C] and selecting from menu if there is more than 1 thing to pickup in that spot.

Some items (like stone/wood for builders) are picked up automatically, others are not. You can mount objects (like bombs or other catapults) in a catapult by holding [E] on the catapult and selecting the Mount Item option.

I probably forgot about something, this a really big list of changes. Read the change log for details:

Knight:
– knight double slash only works when actually hit somebody
– knight shield up works more like a ladder
– knights can glide on shield up (shield parachute)
– fixes to shield collision
– less knockback on sword hits

Bug/feature? from the test build.

We’ve had the master go up and down a few times in the last while, so please bear with us while we sort out what’s going on. Sorry for the interruption!

We’ve been playing the test build all day, just tweaking, adding new ideas, removing the ones that don’t work. This is gonna be a really polished build and well worth the wait. Each class will get a buff and KAG will be even more fun. Still a couple test games ahead of us and I’ll feel ready for a public release.

Adventures, Overworlds and the “Full version”

Before I get to cut into the juicy bits of this post, we’ve decided that there’s too much ambiguity and not enough oomph in the way we’ve been naming the two versions of KAG.

As such, we’ve decided to dub the two versions “King Arthur’s Gold: Classic” and “King Arthur’s Gold” respectively. The classic game will preserve the older, faster paced and less polished roots of the game in the free to play package. This will serve as a demo for players who aren’t sure if they want to buy the game yet. The full version of the game will contain expansive game-mode changes, more classes, items, mechanisms, zombies, and eventually a fully dynamic adventure-cross-fortress-cross-teamplay gaming feast.

For what it’s worth, “KAG classic” is nearing completion and will be feature-locked shortly. The full version of the game is unlikely to be finished for quite a while.

We’ve made a fairly large decision about the direction we’d like to take the main full version game-mode in. If you’re an advocate of TDM or CTF or any other fast-paced mode of play then please bear with me, as we’ll still be supporting them. For those who want a longer, deeper play experience though (me me me me me) we’ve decided that we’d like to make each game into more of an adventure, with much more character attachment than players get in the current game.

We’re going to do this by rolling out three things:

I should note that permadeath will be a serverside variable -> not all servers will feature it, and a player with no currently active character would still be able to spectate the world, so you don’t miss the end of a war just because you died in it.

You’ll also be able to make a new character if your old one dies (…though there might be a setting removing this option, a sort of “hardcore” mode) so that you can continue to participate.

Here’s a rough concept of how the overworld might be presented: 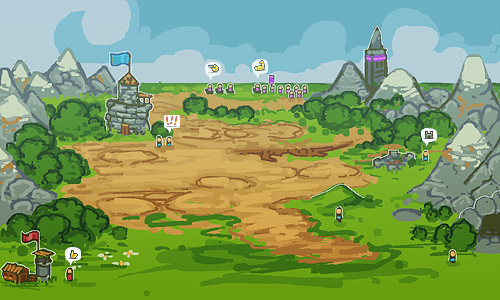 (yes those are cavalry units in the background)

Obviously in-game it’ll be made of sprites and potentially mode7’d into submission for a nostalgia kick for anyone who’s played an old RPG. Something like this but 1024×768 and with a bunch of characters jogging around (this is a shot of Terrigama, copyright Enix 1995 for the SNES):

These changes will make the default mode of KAG play vaguely like an RPG (though we’d like to think of it more as an action adventure). Hopefully also it encourages playing with people you know and team-play in general. Each server will build up its own history of events and hopefully some epic stories will spring up from each game.

For those that aren’t keen at all, there’ll always be TDM and CTF for you 🙂

As a side note, this means we can have many, many more players per server without a stupidly high increase in bandwidth usage because the players in each map only need to know about the nearby players. Massive sieges with 64 units per side on one map would still lag as bad as ever, but considering not everyone playing a server would be playing at the same time (-> some characters would be sleeping) and players will usually be dispersed around the world, each additional player wouldn’t double the bandwidth consumed, which is a start.

Whew, so that’s that. I’ve left out some of the finer points (including “BUT WAHT ABUT GREFIERS!!1! D:

Next release is slated for ~2 weeks from now, possibly earlier, possibly later. The featurelist is uncertain at this point, more info coming when we have it.

If you’ve e-mailed me to mm@thd.vg in the last few days and I haven’t replied please send it to michal.marcinkowski@gmail.com. That e-mail broke for some reason and I need to fix it, sorry.

If you don’t know this by now we’re testing the new release constantly for over a week now. There’s a ton of new stuff there, including new menus, loading catapults on catapults and so on. We had to rebalance the whole game because the new features like workshops made some unexpected changes to the fighting classes. We are heading towards perfection, still got to do the menus better – more intuitive. Anyway the new build will be amazing, I’m sure you will love it!

I got frustrated with not being able to pick blocks as builder when standing on a catapult. So I decided to dig out some nice code from my archives and introduce in-game pie menus. This will really deepen the gameplay and introduce many new features in a nice clear manner.

We need suggestions for a new chat/command menu. Please reply to this topic.

(the KAG Forums use the same account as your game account, so please join us on the forums!)

Just a heads up:

Test build available with a draft implementation of workshops and coins to test and balance. As it is there’s been hardly any attention made to balancing those changes so we’ll be looking for feedback from experienced players on what changes they think should be made based on a few hours of play. 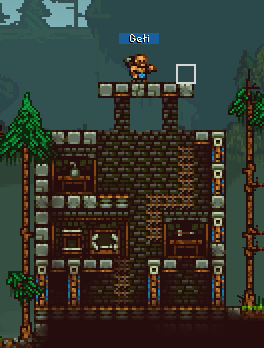 Here’s me atop my freshly created stack-o-workshops.

I was well paid for my efforts building this, netting just over 600 coins I think. That’s probably too much and we’ll need to balance it all, but regardless this sort of building is stupidly useful – anyone standing in the quarters gets free HP over time, arrows on top of the murder-section and beside a bunch of firing ports means archers barely even need to leave the window to stock up and, well, everyone knows what the bomb workshop is for 😉

In summary, get ready to test out how this plays over the next few days, hopefully it’ll be in a suitable state to go live for the weekend!

EDIT: grab the test and give us your comments in this thread.