We’d like to wish everyone following KAG development and playing the game a happy and wonderful xmas. May you have power in your sword, aim in your arrow and strength and wisdom in your hammer to build the best unpenetrable castles.

Got some good news. The IndieDB Awards for 2011 have ended and King Arthur’s Gold got a really significant award. Despite being still in alpha stage it captured IndieDB’s founder attention. It seems it is his favorite game. I know why, because it is awesome fun!

We’ve got a lot of good stuff coming after holidays in a few days. As you probably see there won’t be any release right now. We aimed to release a little something before Christmas but unfortunately I got a bad cold and was out of service for 3 days. Bad timing, but things like this happen. I’m a little sad because we have a ton of stuff done and it could be shared but I don’t want to release anything untested and then leave it for the holidays. So we are aiming now for something before New Year’s.

Once again Merry Xmas and stay tuned. Exciting times ahead of us!

We’re gonna just publish little bits of things from the new gamemode because we want this game mode to be a surprise. When was the last time you said “holy shit!” in a video game? We’re aiming to bring you that experience back.

While we’ve been busy getting this round of goodies together, the community have put together a tournament, set to kick off December 26 or 27!

The forum thread has the needed info: currently sign ups are closed but if you get onto IRC and hassle Carver, Stevedog, and anyone else involved with the organisation they might allow another team to participate, if you’re interested in doing that I’d suggest you get in quick before everything’s been timetabled and set in stone.

It’ll be quite exciting to see how this turns out, there have been a few well organised clan matches in the past but nothing so formal as a tournament, props to Carver and Stevedog for getting this sorted and to the community for being keen enough to participate!

The next release (which should be out in time for christmas!) is looking to be chock full of features! Insofar we’ve talked mostly about zombies, but also the new level format.

Now, the next feature to talk about (and the first thing that we’re going to give you some visuals for) is lighting! Days and nights will cycle in the next version and at night time, lighting will be important for making out anything and thus make wandering in the field a very dangerous thing to do! 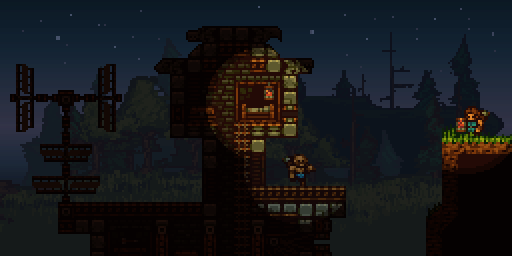 Lanterns will be vital to coordinating a working, safe castle at night-time, but will also give your position away to the enemy should you use them during a night-time raid! They might also prove to be a fire hazard if left lying around in wooden forts 😉

Workshops are going to have a quick overhaul to all fit into 3×3 and use a unified interface of construction and destruction – this means less potential clutter in a builder’s F menu as we add more workshops, and that we can add more workshops in less time – the quarters with lantern in the shot above is an example of how the workshops are being converted graphically.

Sorry to all the people who’ll have to wait it out with crashing 228 KAG – we’re looking into the crash issues and have fixed most of them but we wont be able to release fixes until we have this build completed.

Know that we’re working our butts off on this release, and we’re making up for lost time for sure!

Keep the bugs flowing to bugs.kag2d.com as you find them – though please check for duplicates before reporting!

Today I’m creating a new map format called simply .kag. Right now map saving is done via PNG files. So each map is in fact a bitmap that you can edit in a paint program. This is cool and easy to edit however it is very limited because you can only save tiles and simple objects. The new map format will be able to save and load the entire world with all map objects and their current state. This means we’ll be able to create little single player maps with zombies on them, make multiplayer campaigns with “stories”, put catapults with specific amount of rocks in them, save castles with rooms, drop items and make them available for discovery and much much more. The old PNG format will remain for compatibility and ease of use.

In other news..  we crossed over 2500 full version sales. Thanks everyone for supporting us! We have a terrific community and as you can see we are working hard now to deliver that full version content.

The sounds of grrrrr, mmmmh and “brains!” are filling my room. Guess what I’m working on? Michal’s confident the OSX version will be working on all macs soon, we’ll release a testing version as soon as possible, probably within 24 hours with a OSX-size temporary icon to boot 😉

Unfortunately with the recent changes the Linux version didn’t autoupdate so smoothly. Good news is I fixed it and re-downloading the full version should fix it.