While there was meant to be a build out today with the modding example, a whole heap of new features, and gold names for the Aus Official servers, it’s been delayed.

We’ll be doing our best to get it out on Monday, but we haven’t had enough time to test the changes to KAG “proper”, and the mod example needs a bit more cleaning until MM’s happy to let it into the public hands.

We’re in disagreement about what’s fun at the moment and I think it’ll be much more productive to come back to it after the weekend than make some knee-jerk reaction that could cripple the game.

Sorry to disappoint anyone waiting on the edge of their seat. Delays happen.

THD Tester Norill today recreated the classic game “Left” in the upcoming example mod “Bomb Voyage!”. We’ve done this a few times already during development to test out the physics but to see it happen emergently during testing brought a happy tear to our eyes :’)

Towards the end of last week we were gearing up for testing, however some networking issues got in the way of getting it in the hands of testers, unfortunately. We’ll hopefully get that together over the next day or so, since we’d like to have the mod done by the end of the week.

We’re going to add a nice delay to bombs to reduce the number of accidental explosions that are happening, but they’re quite functional so far.

The defense given by solid walls is invaluable. The cannons must be carefully aimed to take out tiles, but will kill players on any collision. They can be used to remotely detonate explosives as well!

Cannons can also be used to remove tiles you don’t want – this could be extended to torpedo or bomb or fighter boat release systems.

Cannons need to be carefully placed to get a good amount of shooting angle in – this usually means they’re fairly exposed too, allowing retaliatory fire!

Sharks will keep players out of the water.

We decided drowning was no fun, and sharks were more fun. ‘Nuff said.

Figured seeing stuff in action would be most interesting for you guys, so here are some gifs:

The ratios of each type of tile are currently just for testing; there should be far fewer seats in the mix in the final game. Tweaking the ratio of each part is trivial, and might be moved to a config file for easy server-side configuration (for servers with 50% bomb blocks in the mix, for example).

Out of control ship

This little “fighter” ship’s pilot was accidentally munched into one of the propellers, but it stayed active, forming a collision hazard for anyone nearby!

We don’t have the bombs working just yet but with propellers and building working they’re up next, along with cannons! Ship destruction effects are currently super rudimentary but they’ll get some love in the next few days. The “pilot” here probably should have been killed in the collision.

Still to-do graphically is some way of orienting yourself properly with the world as it’s currently very difficult to understand what direction you’re moving in without a point of reference.

We’ve also got to bind a few things in the engine (like the background colour of the world) and potentially fix the parallax layers to work with rotation (though that might take too much time for this cycle, as the issue is due to the way the whole thing is coded, not a one-line bug).

As you can see progress is coming along fairly quickly, and we’re hoping to be able to have a game with the testers on friday after nutting out what needs to be done sync-wise.

Plans for This Week and Next – Big Modding Example!

For the next two weeks we’re going to make a mod for KAG to demonstrate a ground-up total gameplay conversion of the game, and provide examples of how we’d accomplish various things in the engine.

The game we have in mind is a multi-teamed top down ship building game, with a sprinkling of tetris. Each team starts with a “core” that spawns random blocks for building with – these blocks need to be hooked together to protect the hull and provide offensive capabilities to your ship.

Some planned possible configurations include torpedoes, detachable raiding ships, and scrap melee machines. The limit of these configurations will be luck of the parts-draw and your imagination! 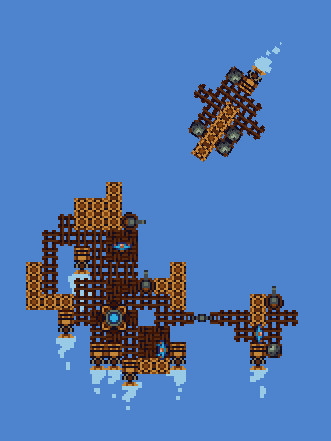 There will be no direct player-to-player combat, no classes and no swimming – if you’re in the water you’ll either need to be picked up by a nearby boat or will swiftly drown, and if you make onto an enemy ship you’ll need to use their guns or bombs to do any damage (or take their controls and crash them into something). We think this will provide a unique form of versus play, and involve a lot of strategy.

Perhaps more importantly, over the next few weeks we’ll be forced to fix any bugs that get in the way of us accomplishing this goal, which will mean an easier time for modders down the road!

We’ll be keeping you posted with frequent updates and pictures :^)

KAG Stream for the charity!

Our friends from the “Who’s Gaming Now?!” are hosting the LAN party event during which they rise the money for the charity. More details can be found here (the event has already started):

Help the good cause!
Furai/Lucas

So, this update is what build 1053 was meant to be about – mod verification.

Its all working now, and you may notice some thumbs up/down icons on the server browser now. These only show for modded servers and they indicate whether or not a server is running mods that are verified (thumbs up = verified, thumbs down = not verified).

What does it mean for a mod to be verified? It means that a mod is confirmed to have come directly from the developer that it claims to have been written by, without having been tampered with. If every mod currently active on a server is verified and the server has mod verification turned on, then the server will get a thumbs up icon in the browser.

So how do you turn on mod verification? With the sv_mods_verified – set it to 1. Note that it is 0/off by default and will be turned off if any of your active mods fail verification.

How does a mod get verified? It needs to first be registered – currently the simplest way to do this is with this app, and then it needs to have a registration.json file generated and distributed with it. Mod devs should therefore generate a new registration file every time they make a new release. This can be done with the same app used to register the mod in the first place, or alternatively a script like this can be used to do it over the command line.

This might seem a little tedius at first, but once you’ve done it once its really quite straightforward. Additionally, this is only the first phase in a move towards a more managed system of mod distribution. For example, it’ll soon be possible to setup your servers to auto-update their active mods whenever a new release of them is made.

I think I’ve covered the broad strokes of the system, but let me know in the forums if you have any questions.

Sorry for the late post. Been trying to push out a hotfix for something that needs changing in this update before the changes are ready to be made proper use of – that’ll have to wait till Monday now, unfortunately.

Basically, this update marks the first inclusion of the mod verification/distribution system I’ve been working on for the past few months.

This first update only caters to the first part, verification: it lets mod devs register their mods and then when servers/clients load up mods they can verify that those mods have come from the developer they claim to have come from, without being tampered with.

Future updates will involve a more robust mod distribution system that will (I hope) please both mod devs and server owners alike (allowing for things like auto-updates of mods as devs push out new releases).

That said… I’m not going to tell you how to use it properly yet, because as I mentioned at the start of this post I still have to make a change to it (hopefully released on Monday) and it’d be best if folks didn’t make use of the new stuff till then. As the new verification stuff is turned off by default, this means that everything is working like normal for now – no changes required.

Anyways, aside from that stuff there were also a couple of minor changes from Geti that you can find in the changelog below.

What exactly is Transhuman Design? Let me explain what it means and what is our mission.

Transhumanism is the movement towards becoming a better human. Much like the philosophy of the Overman/Uberman. However transhumanism achieves this with the use of technology. I see computer games as an important tool that can aid us in evolution and the development of our consciousness.

Transhuman Design’s goal is to aid everybody in their evolution by providing experiences that make them better, faster, stronger and more conscious human beings.

Games are a gym for the mind. A gym that can be shared with people from around the world from all cultures. The ultimate lesson games provide is that all of humanity is sewed from the same cloth. We all like fun, we all have the same emotions when playing good games. This is what unites us all and what games can teach us.

The challenge is to create such experiences that provide emotions in an impactful way, whether it is joy, sadness, happiness, fear or love. Transhuman Design strives to spark these emotions by making better games everyday. This is what makes us and people that play our games better humans. This is how we become – Transhuman.

In the beginning, the game is just a pile of hard unchiseled rock. We are the sculptors that remove stone bit by bit to reveal what is inside.

We had 3 ideas for Station Raiders.

We rejected the first because our mission is to expand our audience. We want different games in Cartridge although we gravitate towards multiplayer action most of the time :).

We rejected the second idea after making and playing it. The idea was laser traps which forced you to be careful and not trip over them. You could move other objects in front of the laser to get pass. It was nice but there was something bigger and shinier sitting quietly beneath. So we ditched the lasers.

It always feels like your creation is not enough. But it is enough. The third idea which is now the core of Station Raiders was there since the beginning.

Inside this rock we discovered a gem. It is not 100% polished, because this game is a prototype, but it is there for you to experience.