Do you want your own KAG dedicated server? Jrgp our webmaster, the man behind kag2d.com has made a new dedicated service for renting King Arthurs’s Gold servers.

KAG Servers is the easiest place to rent the King Arthur’s Gold servers. It has free FTP access and instant deployment. It’s as simple as choosing the number of slots, paying via paypal, and your server will be started within seconds!

So if you want to have your very own KAG server, host the game with possibly your own game mode, rules and maps, head on to: http://kag2dservers.com/ now.

A brief discussion about IPv6

The World IPv6 Launch is a joint effort by content providers, Internet Service Providers, and hardware vendors to make appreciable progress in deploying IPv6.  It is a follow-up of sorts to last year’s World IPv6 Day, where many content providers ran tests with the public for 24 hours to see if there were any unforeseen problems and to gauge the impact of advertising IPv6 availability on their sites.  As was hoped, it was a non-event, as was Facebook recently enabling IPv6 on their site permanently.

I urge you all to call your ISPs and e-mail your favorite sites’ support asking what their plans are to support IPv6.  IPv4 exhaustion is continuing to push forward the deployment of NAT at large scales, which will come at a cost to gamers and other applications which frequently rely on port forwarding.  As the quality of IPv4 connectivity degrades over time, IPv6 will increasingly prevail as the higher quality means for two endpoints to talk to each other.

Beyond that, I have been working carefully to make the new server registration/list components of the KAG API compatible with IPv4 and IPv6, and respecting server owners’ preferences for whether IPv6 is preferred by clients (assuming the client and server both have IPv6 connectivity).  The game netcode itself does not support IPv6 yet because the underlying library we use does not support it, however a medium-to-long term goal of mine is to extend it to support IPv6 or replace our netcode with something else.  Here is a basic overview of the logic that is being built in currently:

If you have any questions about IPv4 exhaustion, IPv6 deployment, or how KAG/gaming will likely deal with these in the future, take a look at the following links and head to this forum thread:

Gotta say guys, we don’t have time to answer all the PMs we’re getting about how to tweak such and such variable or how to figure out a certain aspect of modding – please ask on IRC and try to figure it out yourself, because you’re more likely to get an answer that way.

I’m getting 12+ PMs a day on the forums about bugs, water and modding vars, where the information is either freely available, available by consulting other members of the community, or should become pretty clear upon inspection. Answering these is unmaintainable and wastes a lot of development time.

As such, please ask on the forums or IRC about modding, and search bugs.kag2d.com for bugs. Report bugs at the latter address as well, for those that don’t know – be sure to include as much useful information as you can. We simply don’t have time to make a game, answer queries in specific threadsandhelp you out with modding your zombies. If you can’t figure it out, someone else will be able to help you.

For bonus points, if you figure something new out, put it on the wiki so that it becomes public knowledge.

Things that we’ve been working on this week: 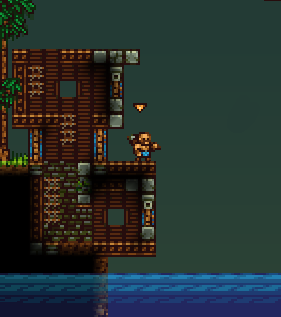 (With the two above additions, its only a matter of time before we introduce fire…)

There have been a few fixes (/loadmap now works for configs, and /savemap doesn’t append .kag no matter what, a few technical things) and Ryan/FLAB is making good headway with some more API stuff that will reduce server load quite a bit during peak times, but most importantly we’re working on block colliders that can move around, carry players and crush them against walls.

Its early days yet, but this should lead to config defined building blocks, and building blocks larger than one tile. It’s also already lead to Michal testing a rudimentary smasher, which was a smashing success. You can have a look at the video here as I cant figure out how to embed into this post, heh.

Unfortunately due to how we set up the new build system with the release of build 393/394, the dedicated server would stop working on CentOS/RHEL/etc 5 and other aging distros with older glibc/glibcxx.  I have replaced the node in our build system which builds the linux versions with CentOS5 so that we can generate more portable binaries.

If your server was broken as part of the 393/394 update, you can manually fix it (without having to redownload/reconfigure your server) by replacing the following files in your server folder:

Sorry again for the inconvenience, we will take more care to prevent this in the future!

Zombie Fortress feels like a whole game in itself but KAG is definitely not finished!

We are officially heading now towards version 1.0.

We will be adding (trying to add) all the features that we promised over the months and which you can see on the in-game buy poster or website. Not all of them will probably make it because if a particular feature is not fun or doesn’t really work or is simply not doable we won’t do it. But on the other hand we will add other elements which are better, more fun and more fitting. So expect to get what you desire and expect to get awesome features you don’t expect!

I’ve started work on water and wooden structures and will be moving on shortly to vehicles and siege machines. This will be exciting! Be sure to come back for updates!

A few of the heads had some pixels go wrong for one reason or another when putting them in-game. An update fixing this should make its way out to you in the next 10min or so, shouldn’t affect gameplay at all.

This is mostly just so people don’t raise eyebrows at their KAG patching. Enjoy your slightly more colourful braveheart face and fixed eyes on the samurai and rice worker heads.

With our move to the build system we also started building the mac build on OS X 10.6.  We did not have the build done in such a way that the output was compatible with OS X 10.5, so any of you with OS X 10.5 probably had your KAG installs break if you updated in the past 48 hours.

For anyone else who came here wondering why their mac build updated on 10.6 or 10.7, this is why.  No other changes were introduced.

There was an issue with the auto update system for KAG which would have caused new installs from the website not to update for the past 12-14 hours (since 393 was released).  This is resolved now, and any of you who were stuck on an old build like 345 should be able to update now just by opening the client.

If you continue having problems, head to the KAG Forum for help

I forgot to raise the price for KAG after the official Zombie Fortress Multiplayer release. We promised it so we are doing this after todays hot-fixes. So this is really the last chance to get the game and play online against zombies for 9.99$. New price will be 12.99$.

Good news is, if you can’t pay with PayPal, Credit Card or Google/Amazon – you can pay with your mobile phone through Zong (a PayPal company). Zong has probably every country covered so you can pay for KAG with your phone wherever you are. Just click on the little red Zong button and check if you can buy it now. After entering your phone number you will receive a PIN code. After entering this PIN code you will get a KAG code to unlock the Full Version. It’s that easy. No SMS or anything else. See for yourself.