Exciting news, today marks the pilot release of Trench Run!
This is a build for supporters that pre-ordered the game (you can still do that here!).
Some new features include:

If we start to see exceptionally high wait times, we can add more servers. By our maths that shouldn’t happen unless it goes seriously viral (tell your friends!). 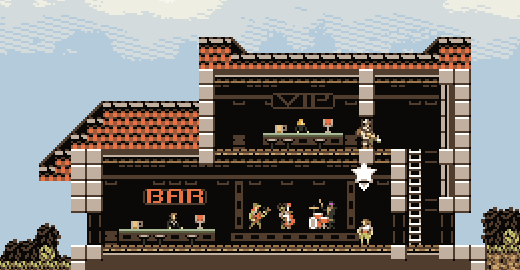 Looking forward to meeting you in the bar!

We’ll be entering a more iterative development period as of this build. This means more regular updates with smaller changesets, to pin down any gameplay issues and bugs as soon as we can. While we’ll be less active over the new year period, early 2016 should be an exciting time for Trench Run.

For those that havent got a key, you can get one HERE!

Important limitations to keep in mind:

Despite these limitations, we hope the community will welcome a play-anytime Trench Run experience. We will be using the following weeks to gauge your interest and gather feedback on the game.

Please leave any and all feedback on the Trench Run Forums, which we’ll be reading carefully in the coming weeks.

Again – if you havent got a key, now’s the time to grab one HERE! (If something looks fishy about the website – try clearing the browser’s cache.)

This is a fix-only build for the rendering issues people were having using fullscreen and funny resolutions in 1711/1712. Please post on the forums if you have any more issues with strange rendering, with as much detail as you can to help us reproduce your issue. Logs, hardware, operating system and settings used would be a good start.

There is one known caveat to this – Windows High DPI rendering mode can cause the game to be cut off in fullscreen mode. The only fix at the moment is to instruct windows not to apply DPI scaling to KAG by right-clicking KAG.exe in your KAG directory, selecting properties, and disabling scaling in the compatibility tab, like in the screenshot below. 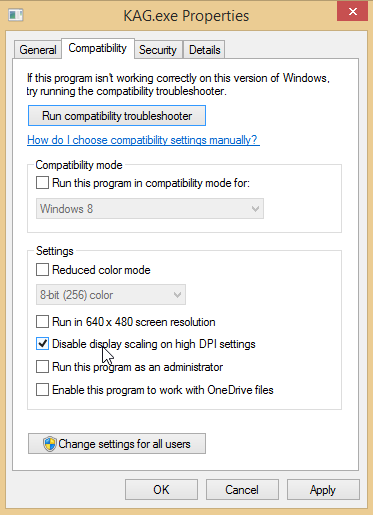 We’re looking into possible fixes from our side, but our build infrastructure and other compatibility concerns mean this will take a little more time than an afternoon.

Sorry about the server outages – turns out some of the holiday code was left in an unfinished state and as the day rolled around the servers started trying to load code that wasn’t there. This build fixes that issue as well as including all the accumulated changes since last build.

Sorry for the haphazard presentation of this build, we weren’t planning on making a release so soon but the crash issue has made it necessary. Thank you for bearing with us through this.

We’ll be checking the build’s stability as much as we can but most of THD is out of the office over the new year period. Let us know on the forums if you continue to have issues and we’ll deal with it as soon as possible.

Hey everyone! Tis the season and all that, so we’ve been run off our feet with both work and personal life. Progress on Trench Run has been consistent though, and there’s a KAG build in the works as well. Sorry for the wait between posts!

General News:
Michal spent the last two weeks not working on Trench Run all that much because another game needed his attention. He’ll be working more on Trench Run in the weeks leading up to the new year. Max is having computer troubles and spent all of today migrating to an interim machine, but has made good headway on a lot of Trench Run features in the meantime.

Trench Run News:
After a less than inspiring turnout for the 2nd free preview, we’ve turned our eyes toward a supporter release. This release will have permanent servers and no time limit, but will require a payment to access. After that’s out the door and any (all?) issues are resolved, we’ll continue with free preview cycles.

The supporter release will be the first public release of a lobby with real content, including a bar, band, and coins to win from the games to spend. Depending on what sort of population we see, we may split each region into multiple lobbies. If the population remains modest, we’ll stick with one lobby per region to avoid splitting up players too much.

This week we got a heap of the lobby stuff working, including getting drunk (see the vine above). This will serve as a way for players to handicap themselves when playing with less skilled players, and in some cases to induce motion sickness.

King Arthur’s Gold News:
Verra and Skinney are both working towards a new version of KAG, but as they’re part time workers and it’s the holiday season, progress has been slower than usual.

Coming next build are much-requested changes such as mines not hitting through shields for anyone not touching the mine, fixes for ladders lagging servers to hell and back in certain circumstances, coin payment fixes involving overkill, and an end to the notorious “clbutt” when using the swear filter.