Restart your game to auto-patch!

We’re probably happier than you guys to see this one out the door, haha. It’s taken way too long.

First thing you’ll notice is the different menus and the awesome menu music by David Pencil (in-game music coming soon), but that’s not all that’s changed:

Collapses are the largest in-game alteration – we’re working to make them more predictable at the moment (short on time…) but I think most players will like the extra residue and danger of a large collapse, as well as limited ability to ride atop blocks in a collapse – we’re hoping to get a proper rubble system happening soon too, I’ve got a few ideas there. I’m planning on adding to the effects first chance I get, been watching a lot of building demolitions. 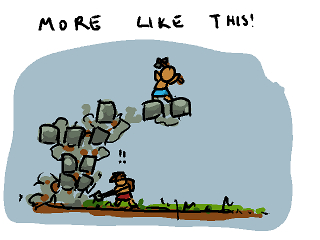 Customisation is now done in the settings menu rather than in-game – we think this makes a lot more sense but might easily confuse people.

There’s now a quick-join feature in-game! We’ll probably have to tweak the selection algorithm a little with real-world

There’s now some access to the internet in-game, allowing you to browse the forums, chat on IRC and read the KAG manual without opening your browser! This seems to have issues with older graphics cards, which we’ll look into.

A bunch of smaller fixes have been snuck in as well – it no longer says “his” when girls kill people, autobalance should be less retarded and less rude, physics should be less CPU intensive, bridges aren’t so cheap, doors aren’t so expensive, resources are lost in ripping out bridges and doors, there’s clear terms of service, see the changelog for more!

For server hosts, you can now specify overrides for the number of slots, IP and port number on the command line, as well as a break_time_static variable that lets you set the building time at the start in seconds that’s independent of the number of players, due to popular request. See the changelog for details.

Needless to say, there are probably some very strange bugs that’ll only become apparent through the heavier testing of a public build so we’ll be running bugfixes as needed. Hit up bugs.kag2d.com to report issues to get them dealt with sooner!

More voting to do!

Oh god so many buttons to press I know, but we’re really hoping for your support on this one. Be sure to check out the other indie titles vying for the top-100 (after you’ve voted for KAG of course 😉

2011 Indie of the Year Awards via Indie DB

(scroll down to the area with the nice trees after clicking)

So, we get a lot of bug reports, naturally, as the game is in alpha and we simply don’t have time to fix everything when it comes to making a release. Problem is, a lot of those reports are duplicates and reading through them burns precious fun development time!

We’ve decided to implement mantis bug tracking (same thing Bay12Games use for tracking all the bugs in dwarf fortress, so at least we know it scales well) so that duplicate reports are minimised and bug reports are separated from the discussion on the forums.

If you find something screwy in-game, search for it first and then if it’s not there, report it. We’ll be addressing them in any spare time we can muster – do note however that as we’re more or less about to make a release many of the 203 bugs are fixed!