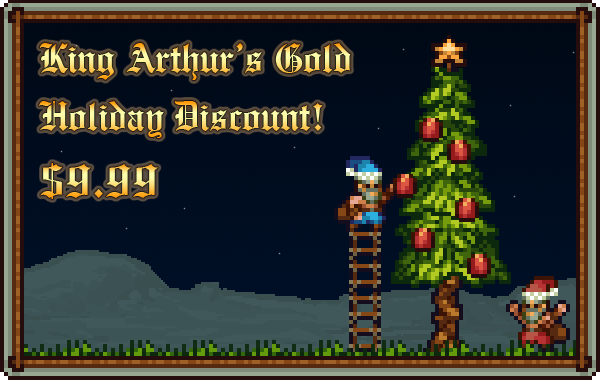 December 21, 2012 – To celebrate the holidays, we’ve decided to lower the price of King Arthur’s Gold to $9.99! Huzzah! If you already have a Gold account, thank you! Consider gifting it to a friend.

To buy gold account which means getting full access to all the features + full version when it is out, just go to this page (CLICK). You can pay with PayPal, Amazon, Google or Mobile phone.

Working right through armageddon, we’ve finally completed the new engine and all the content. The game is looking better than ever, with many new features including: new art, a new game-mode, completely rewritten water simulation, mountable vehicles, dynamic soundtrack, and lots more.

Of course, the most important addition has been the implementation of the insanely powerful AngelScript scripting library. 99% of the new gameplay mechanics have been created using this language and virtually all aspects of gameplay can be customized by the community.

We can’t wait to show you, but it’s still a little too early to release it to the public. In the meantime we’ll be doing internal tests and we’ll have some gameplay videos to show you soon, followed by a preview of the scripting engine, with a public release of the beta to come shortly after. The wait won’t be much longer – We promise!